Once again we have the perfect circle which immediately gives our image a sense of balance. Volkswagen uses the perfect amount of negative space in order to separate the letter “V” from the letter “W” while still maintaining that shape that is created from combining the two together. Both letters are created from positive space around it, giving the letters a unique stability. The letters seem to run off into the circle that is surrounded by a black outline, this logo is immortal, as are many of our famous car emblems. 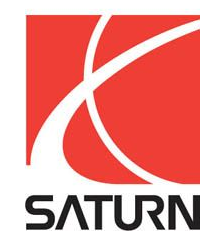 “The logo for GM’s emerging automobile division Saturn was introduced around 1984. Always set within a red rectangle, the intersecting circular and oval lines, which bleed out of the box, represent the spherical planet and its encircling rings.”

Although out of business today, I assure you that is not because of this logos failure of representation. This logo never needed the word saturn, but wow did they do a nice job with the typography. The letter “A” seems to separate the word into two parts, “S” and “Turn”. The logo itself uses negative space inside of a rectangle to create the image of the planet saturn. The logo breaks off at the borders of the rectangle without losing its representation of a planet. Somehow our brain manages to finish the rest of the image, and we see a planet even though less than half of the image (planet and ring broken off by the red border) is represented, now that is pure logo mastery.

Posted by Unknown at 2:32 PM No comments:

Earlier I talked about how I never start designing until I have done a significant amount of research about a company/brand. The first thing I want to do is research the brand and find out what their core values are. Core values may include, customer service, helpful, friendly, fast service, and welcoming. Once you have a brand's core values, you can begin to pick out words that you think would well represent the company. This brainstorm of words is to help explore as many ways as possible to describe the brand. You may end up with words like fast, circle, yellow, and food. Once you have a large list, you can start to highlight the words that you think promote the brand most effectively.

How are you supposed to create an effective logo without a substantial amount of knowledge on the brand? You simply cannot, that is why research is the crucial first step of logo design. With your refined list of words, you can now begin to sketch out elements that you think represent those core values. These sketches should not be detailed, they should be quick thumbnail sketches of ideas, shapes and colors you think may be helpful further down the road. After you have completed all of the tasks above, it is time for feedback. Anyone can give helpful feedback, it is important to ask family, friends, clients and co-workers for their opinion. By now, you have a general feel for the ideas/themes that people are gravitating towards.

Once you have an idea that most people can agree upon, its finally time to start designing. Make sure that you complete all of these tasks before you begin designing, or else you will run into problems down the road. If you run with an idea before getting any feedback, there is a good chance that you will have to backtrack in order to please the crowd. Do yourself a favor and follow these guidelines to guarantee that your branding process runs as smoothly as possible.
Posted by Unknown at 12:05 PM No comments:

Today I will critique some logo's that I find effective for their respective brand's identity.


This logo is successful with the way it incorporates the letters JCC as well as depicting an outline of the Star of David, a symbol of Judaism. JCC stands for Jewish Community Center, the repeated “J’s” rotated over and over agin create the letters JCC. The repeated J’s also create the 6 pointed star with the remaining negative space. The sleek design and creative letter placement gives this logo multiple meaning and representations that all give the JCC its defined image.

2.
Circles are a common theme that we start to see with many logo designs. The perfect geometric shape provides an image with symmetry, giving the overall image a sense of balance. This logo uses negative space to make the letters BMW pop. It also uses a checkerboard in the center to represent the checkered flag we can see in professional races. The symmetry and balance give this logo cohesion and precision, making it the successful logo we all know today.

Posted by Unknown at 6:10 PM No comments: